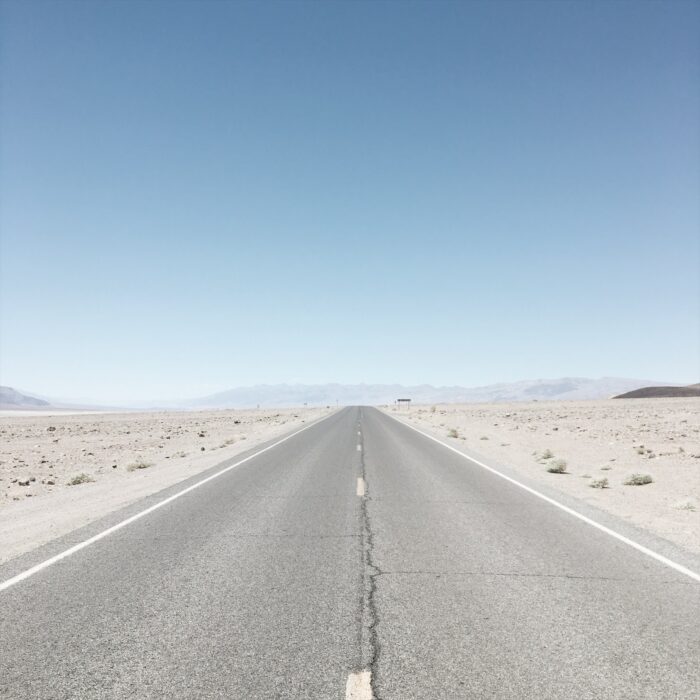 I was flicking through Verne Harnish’s book Scaling Up and I came across the concept of the Valley of Death.  This is something I have seen in a number of different guises.  His version is interesting as it warns us of a number of Valley’s as the business scales.  Specifically he groups ‘Firms’ into four sizes from < $1 million to >$50 million in Revenues; the four stages of growth in a scaling business. 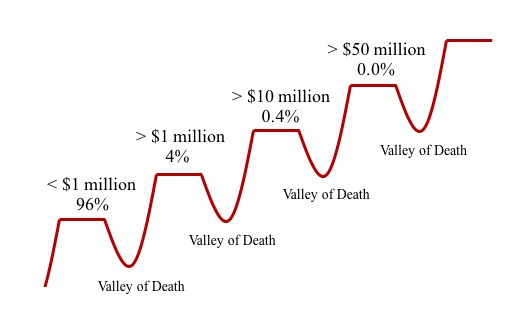 The percentages in the image above relate to the percentage of 28 million US Firms analysed.  17,000 are > $ 50 million (<0.1%).  His book develops a model with 4 components; People, Strategy, Execution and Cash.  We need to get all four right to avoid the numerous Valleys of Death.

The tag line of the book is ‘How a Few Companies Make it …and Why the Rest Don’t’.  The data set above may be misleading as a significant number of ‘Firms’ in the < $1 million will be individual consulting businesses, local services etc. that have no realistic plan to grow.  What’s more interesting for me is that approx. one in 10 US ‘Firms’ grow beyond $10 million once they have achieved $1 million in revenues, as long as they remain in existence; avoiding the Valleys of Death. Between one and two out of every hundred that are > $1 million in revenues make it to > $50 million.  I like those odds better.  That said, Lies, Dam Lies and Statistics does jump to mind.

The simple message for scaling businesses is the risk of failure.  This is often simplified as a problem when the business runs out of cash but in reality this is the final step in a business failure.  The problems probably start at the very beginning.  Often I see a business that is set up as a life style business by the owner and then after some success the owner starts to get ambitious, dreaming of riches and success.  Scaling this type of business is fraught with risk mostly down to the approach of the owner.

I use the title ‘Owner’ here with purpose.  If you call yourself the owner, then be careful how you approach scaling.  The owner mindset is very different.  Founder is a more appropriate title for a business that has ambitions to scale.

I like the image below for social enterprises which I took from the Oxfam Blogs.  This is the version of the Valley of Death that I’m more familiar with.  There is another version that speaks to a ‘Chasm’ that the business has to jump as it moves from Start-up to Expansion.  How a business expands with funding, what we call it at each stage and the relationship between revenue and expenses is worth reflecting on. It can get more complex as we describe levels of funding, zero stage, series A etc. but they all refer to the same concept. 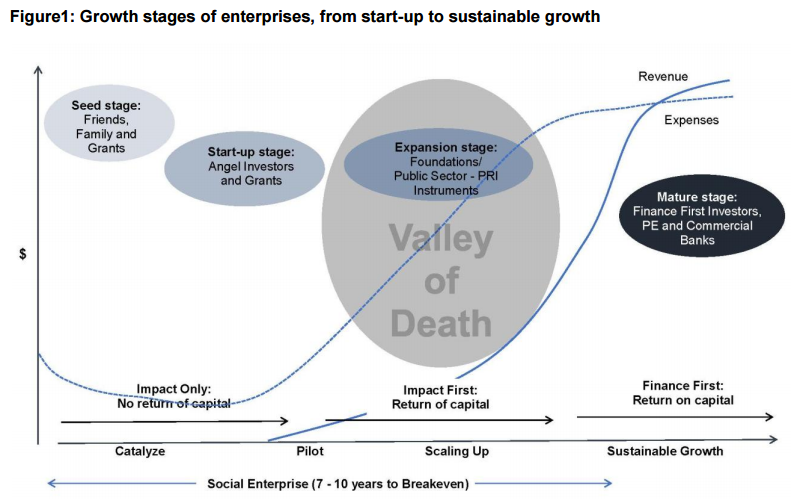 As I looked into this I found a relationship with the Kubler-Ross Change Curve, which isn’t something I had considered before. The Kubler-Ross Change Curve models the stages we go through as we deal with change.  It is focused on the five stages of grief but is very relevant to business change.  I came across it after the 2008 Financial Crises and used it extensively to help owners deal with the challenges they were facing at that time. 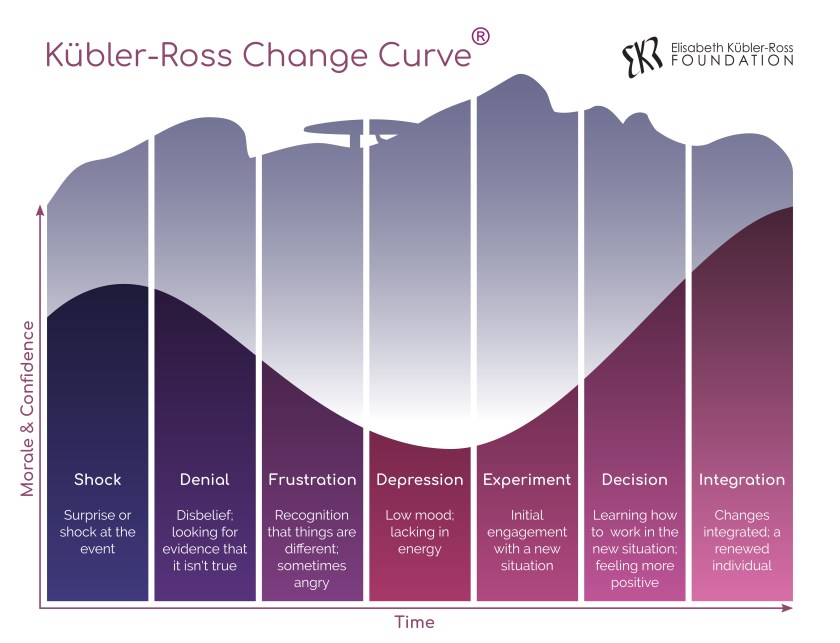 If you consider how we deal with grief as you read the chart you will see how it works.  In the last financial crises business owners suffered similarly as they dealt with the loss of their business or similar challenges. Covid 19 hasn’t been the same as the government supports have prevented businesses going under for now but many people have had to deal with unexpected personal grief.

For founders this is a different challenge.  Marrying the Kubler-Ross curve with the Valley of Death Curve outlined above you can imagine the mindset of the founder as the business goes through the different stages. The chasm I spoke about earlier refers to the ability of the founder to jump through the phase of depression that comes when outcomes don’t go to plan.  These challenges may be smaller and continuous as the business experiments with growth or there may be one or two very large challenges that the founders need to deal with.

This is the point where the Verne model at the start gave me strong identification.  Verne refers to a number of Valleys of Death each requiring us to go through the Kubler-Ross process to survive.

Have you ever considered are you an owner or a founder?